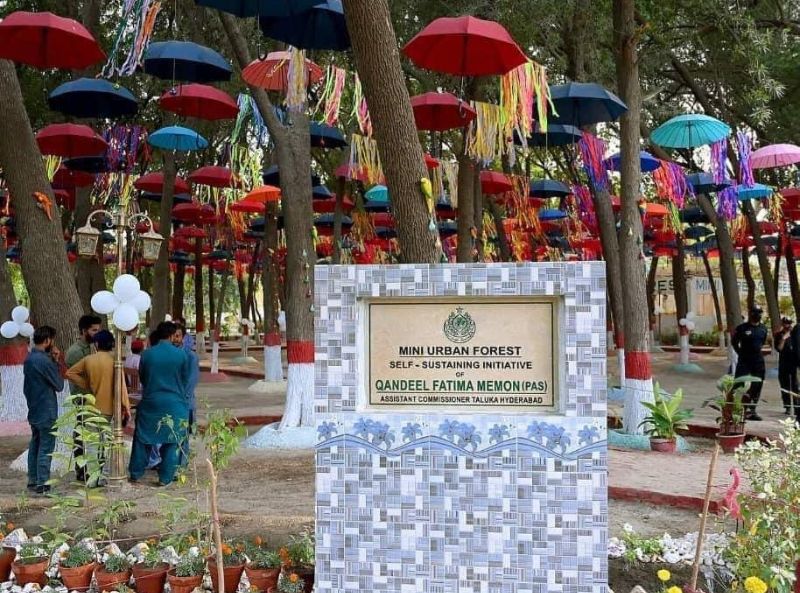 Mini-forests are small areas of forest often found in urban centers. Saplings are planted at three per square meter, which is far denser than in normal forests. These forests can be as small as a tennis court meaning that they can exist in urban areas which are often lacking biodiversity. A great initiative has been taken by the district commissioner of Tando jam by inaugurating a mini urban forest. The eye-catching look of the forest decorated with coloured umbrellas has begged the attention of the whole of Pakistan.

There are numerous benefits of the mini urban forest. It not only maintains the desirable vegetation cover but also protects the biodiversity by providing preferable habitat to birds and animals. Besides, these parks are the need of the hour to contain the menace of global warming. Global warming, which begets climate change, is a global phenomenon therefore mini urban forest is the best step to contain it at the local level. The local community also gets benefits from these green spaces.

These parks provide fresh oxygen and suitable area for walking and exercise which ultimately put positive psychology impacts on humans. Therefore, the idea of a mini urban forest should be promoted and supported by the government at all levels of society. Besides, the government should also launch an awareness campaign regarding the benefits of these forests so the people should take interest in the building and protect mini urban forests.