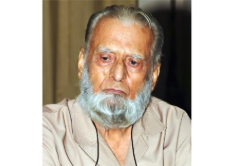 With Sheikh Abdur Rasheed's passing on Thursday 21st January 2021, the Town Planning profession lost one of its most talented, respected, and beloved members.

He spent an extensive part of his life working for the betterment of the profession, fashioning new ways to strengthen the profession, and depicting the importance of urban planning as a top part of the country's social and communal fabric. He was one of the first urban planners of Pakistan. He laid the groundwork for future generations to follow in his footsteps.
Born in 1936, Sheikh Rasheed completed his M.A. in Sociology from Punjab University in 1961 and his MSc. in Town Planning from UET Lahore in 1965. He further did a post-graduate diploma in Planning Housing and Building from the Netherlands in 1970. Being one of the first urban planners in the country with a sociology specialization made him more perceptive, receptive, and open towards the country's urban social and development problems. He was one of the first planners that showed that urban planning is not just another field of study. Still, it is intricately plaited into the overall structure of society. It is related to every other discipline such as economics, sociology, engineering and politics. With every experience, he became more knowledgeable and, in due course, became a sea of wisdom and learning for every coming generation of urban planners.

His seasoned career included being a planner under the Ministry of Municipal & Rural Affairs Saudi Arabia and Director-General twice for the Punjab and Lahore Development Authority.

After his retirement in 1996, Sheikh Rasheed joined MM Pakistan. He spent 25 years of his career flourishing as a Team Leader, Co-coordinator, Planning Advisor, and Sector Head on various assignments. His dedication and enthusiasm in his roles were highly motivational for young and old. His participation brought another level of professional excellence to MMP's Urban & Infrastructure Sector. As with all of his ventures, he leaves behind a legacy of being the pioneer of developing Master Planning within MMP.
He worked on projects of much significance in every province of the country. As Director-General of LDA, he guided the early planning and development process of the metropolis. As an executive member of the planning and development board, he improved and streamlined the entire province's planning and development process. He was one of the members who reviewed the existing master plan of Islamabad under the request of CDA.

In addition to all these major social and policy-related works, he has multiple stars on his shoulders for working as a principal planner and as a sociologist for various urban and rural housing projects, master plans of international cities, water and transport-related projects.
Sheikh Abdur Rasheed will be remembered as an exceptional Townplanner and an extraordinary human being by students, colleagues and the country's Town Planners. May Allah grant him the highest place in Jannat.