The Monastery of St. Simon (Simeon) the Tanner
by LaraIskander

Saint Simon the Tanner (St. Sama'an, in Arabic) lived towards the end of the tenth century when Egypt was ruled by the Fatimid Caliph, Al- Muizz and Anba Abram was the Coptic Pope.

At the time, the Copts (Christians) in Egypt were engaged in handicrafts. St Simon worked in one of the crafts widespread in Babylon (Old Cairo) which was tanning, a craft still known there till this day.

This profession involved also other crafts that depend on the process, from where he carried several titles related to skins; St Simon the Tanner, the Cobber, the Shoemaker.

The Monastery, located on the opposite side of the road leading to the Citadel contains seven Churches and Chapels hidden in a series of caves in the Mokattam (Muqattam) hills.

The Monastery was erected and dedicated to him a thousand years after his miracle and his death. It lies behind "Mansheiyet Nasser", the Zabbalin village (garbage collectors). This village was erratically established in 1969 when the Governor decided to move all the garbage collectors of Cairo to one of the hills of the Mokattam. There, they built themselves primitive houses of tin. The number of trash collectors living in the area reached about 15.000 in 1987. This number has doubled now.

Reaching the monastery is quite a difficult approach. Amazingly, the people there will point you in the right direction knowing your destination without even been asked. The Monastery is reached through the narrow village streets, trash carts passing you by along with piles of rubbish, plastics, and tins on the sides of the alleys with people sorting them out. Even if described in detail, the Zabbalin village is a hard place to picture, far from one's imagination; it can only be grasped on site.

At the far end of the village, awaits you an unexpected, stunning place; a vast open space lying in the bosom of the hills, with dramatic colored carvings all over the mountain. The carvings were done by a Polish Artist who begun working there several years ago. They represent stories from the Bible such as the Holy Family journey and the Nativity scene.

According to Coptic sayings, the Caliph Al Muizz, an enlightened man, was fond of literacy gatherings and inviting different religious leaders to debate in his presence with neither anger nor contention.

In one of those meetings in which Pope Abram and a Jew named Jacob Ibn Killis were present, the Pope got the upper hand in the debate. Plotting to take revenge, Ibn Killis quoted the verse where the Lord Jesus said in Mt 17:20: "If you have faith as small as a mustard seed, you can say to the mountain, Move from here to there, and it will move, nothing will be impossible for you" and demanded him to prove that his religion is right by means of this.

The Caliph saw in this an opportunity to remove the mountain that was spoiling his view. At the same time, if they proved unable to do so, it would be proof that the religion of the Christians was wrong and he would be done away with them completely or so goes the Legend.

And so, after 3 days of prayers and fasts by the people throughout the land of Egypt, Simon was chosen to move the Mokattam Mountain. It is said that a great earthquake swept over the mountain. Each time the people stood up to worship, the mountain was thrust up and the sun would be seen from under it. When the people sat down, the mountain thrust down. This was repeated three times.

St Simon was never found afterward. His skeleton was discovered in 1991 in Babylon in St Mary's church (the Hanging Church).

The Virgin Mary and St Simon Cathedral was constructed in 2 stages. At first, it was only a huge cave of limestone in the bosom of the hill. The audience was seated on straw rugs around the alter which was prepared in 1986. The 2nd stage was in November 1994 which falls on the feast of St Simon. The church was reconstructed and the ground was deepened once more. Fixed seats were constructed around the altar in the form of a quarter-circle auditorium to accommodate up to five thousand people and thus it became the biggest church in the Monastery.

To the right side of the altar, the church keeps the remains of St Simon's body.

In the year 1974, upon the ceiling and to the right side of the altar, an obvious engraved figure of the Virgin Mary holding the baby Jesus Christ was discovered, not touched by any human hand. It was later revised in the year 1994.

Another amazing Chapel in the Monastery is St Bola's Church, named after St Bola the first Pilgrim for virtues he possessed. He lived in caves and solitude for 70 years during which he never set eyes upon a human face.

The Chapel cave was discovered in 1986 by pure coincidence during construction works when a huge rock fell showing an opening in the ceiling of the cave and thus, the church location was decided

An astonishing story about this church took place in January 1992 when it was endangered by a fire caused by an electric spark. The picture of Jesus Christ hanging in the church and the alter were by no means destroyed even though the whole interior of the cave was damaged.

A third church of the series of churches in the Monastery is St Mark's Church and St Simon the tanner's Hall. This huge cave was discovered in 1979 full of hundreds of tons of rocks at a height of 17 meters from the ground.

Left: A Sanctuary within the Church;
Right: Biblical carvings in St Simon the Tanner's hall.

After several years of hard work and prayer, they began to find a path to start removing the rocks, and finally it was prepared to contain 2 levels.

The upper story is St Simon's Hall which accommodates 2000 people in spiritual meetings. The walls are decorated with many wonderful pictures engraved on the rocks representing scenes from the Bible.

Above Interior view of the cave now used for spiritual meetings and events. 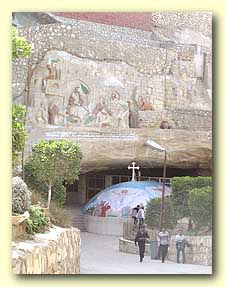 Above: Entrance to St Mark's Church and the upper floor Hall showing the decorated dome of the church.

The lower story is St Mark's Church which is named after St Mark, the first preacher in Egypt.

The church dome at the hall entrance is decorated from the outside with three great artistic pieces made of small mosaic on top of the dome, representing important scenes of the Bible.

This Monastery, a tribute to St Simon, receives large numbers of pilgrims and is mostly visited by the people of the Zabbalin village.

Left: View of the monastery located in the heart of Mokattam Mountain.
Right: Biblical Carvings done by Polish artist, Mario who continues working at the monastery. St

Simon's Monastery also includes an educational Center; a kinder garden, a school for the deaf and dumb, and literacy and vocational courses.

The unusual location, the unexpected size of the caves, and the beauty of the engravings, all combined are astonishing.

Even though the work there is relatively recent, it might as well seem that the Monastery has been hiding there since ever so much so that it feels like a part of the Mokattam Hills.

By all means, visiting the place is an exceptional experience that's not to be missed.

Lara Iskander works to restore monuments in Egypt. Information for this article was provided by church documentation.