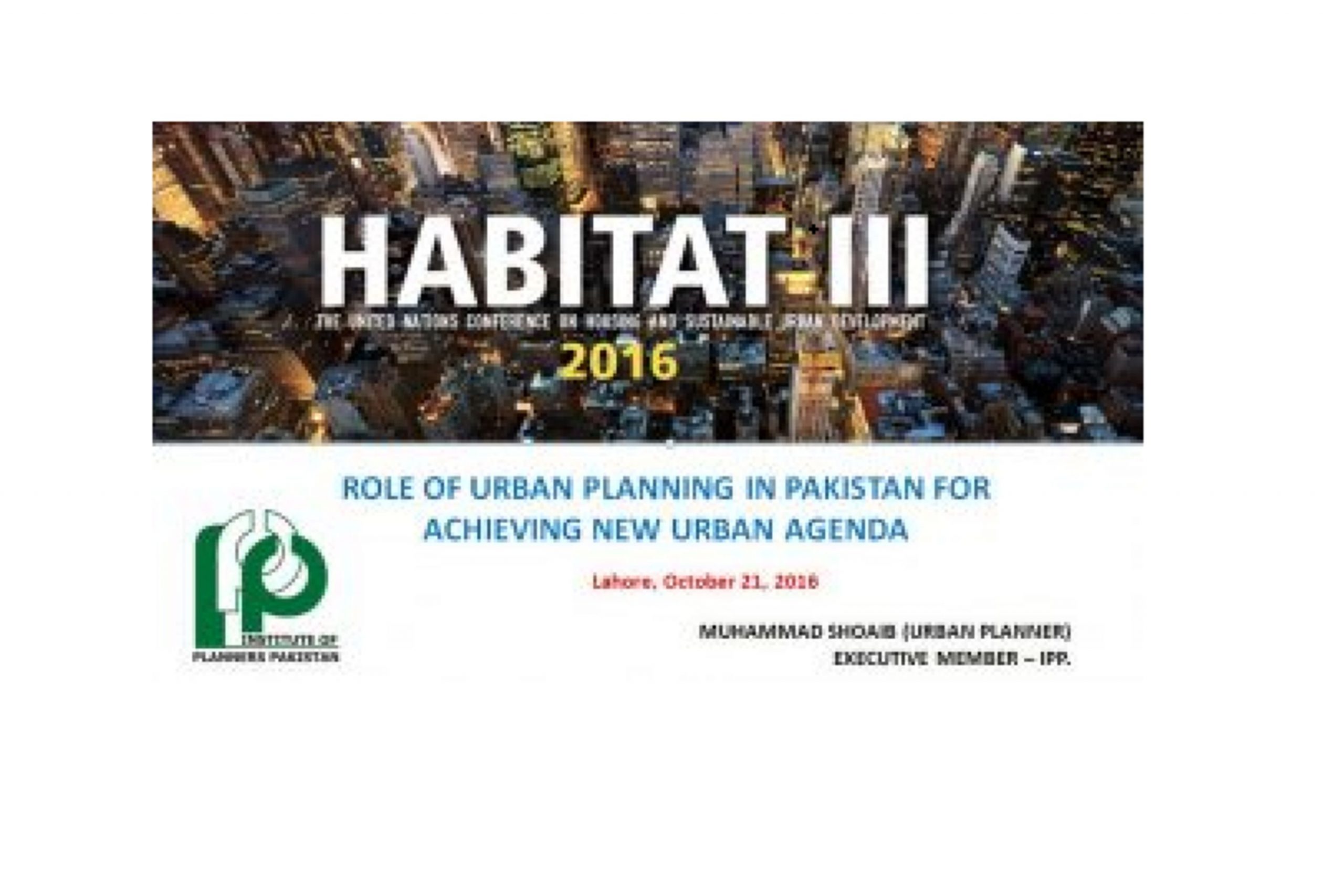 Lahore, October 21, 2016: A technical session on understanding the “New Urban Agenda” with reference to Pakistan was organized by the Institute of Planners Pakistan (IPP) It was held at the office of Sheher Saaz (Pvt.) Limited (Architectural and Urban Planning Firm). The purpose of this session was to create awareness in researchers, policy makers, built environment practitioners and public regarding the importance of Third United Nations Conference on Housing and Sustainable Urban Development (Habitat III) and how the agreed agenda is related with Pakistan and what role IPP and various built-environment professionals have to play in achieving the targets set in the New Urban Agenda. In the beginning session all the participants introduced each other. Mr. Khurram Farid Bargatt, The Secretary General of IPP gave a brief introduction about Habitat I, II, III and Pakistan’s participation in events.

Planner Muhammad Shoaib, Executive Member IPP gave a detailed presentation elaborating Habitat I,II & III and Pakistan’s role in achieving the goals and objectives of these conferences. He interpreted the need of organizing these conferences every twenty years. He added “at the time of Habitat I in 1976, urbanization was considered as a challenge and the need to create a global institution to oversee the impacts of urbanization was realized thus giving space to the creation of UN Habitat. But in Habitat II in 1996, it was more focused on assessing two decadal progress and setting forth fresh goals for the new millennium by introducing Habitat Agenda “Adequate Shelter for All”. He maintained that Habitat III in 2016 is quite important as it is setting a “New Urban Agenda” which addresses urbanization as endogenous source of development, linking urbanization with climate change, considering urbanization as a tool that can integrate socio-economic development and equity. This means the New Urban Agenda will be following and pushing the progress on Sustainable Development Goals 2030. The New Urban Agenda will address the challenges of poverty, inequality, addressing climate change, looking forward to sustainable forms of consumption and production in the next twenty years.”

He maintained that Pakistan is a fast urbanizing country among South Asia, 35.8% in 2005; 38.6% in 2015 and 39 in 2016 and it is likely that Pakistan will be 50% urbanized by the year 2025. Which means currently almost 3 million population equivalent to the size of city of Faisalabad is added to our existing cities annually. However, our cities are unable to foster planned growth and almost 60% population lives in slums or slums like condition. He further stressed that urbanization is a blessing in disguise. The need is to steer planned urbanization and getting fruitful results. The New Urban Agenda focuses on six thematic areas (i) Urban Economy; (ii). Urban Demographics (Social Cohesion and Equity) - Livable Cities; (iii) urban Frameworks (Public Policies, Governance and Legislation); (iv). Urban Ecology and Environment; (v). Urban Planning and Design (Spatial Development); and (vi). Housing and Basic Services. The major implementing strategies that the states have to consider under the New Urban Agenda include: (i) Revising Urban Rules and regulation, (ii) fostering Urban Planning & Design; (iii) ensuring  Municipal Finances and (iv) connecting National Urban Policies with the dynamics of urbanization.

After the presentation the house was opened for discussion on The New Urban Agenda adopted at Habitat III Conference in Quito on 20th October, 2016. Among the participants, Mr. Rizwan ur Rehman mentioned that Pakistan National Report submitted by the Ministry of Climate Change was prepared in hurry and didn’t consult public for comments and feedback without going for larger stakeholder consultation. Mr. Khurram Farid Bargatt highlighted the fact that the institutions responsible for urban planning and management are not well aware of Habitat II Agenda till today and the same thing has happened for the Agenda of Habitat III. All institutions were not taken on board for the preparation and consultation for this conference at any stage. Mr. Naveed ul Haq, from Elan Environmental Consultant, expressed that there is need of new laws on environment and building regulations. Mr. Khurram Farid mentioned that after 18th the Amendment powers were supposed to be transferred to local bodies this has also been emphasized in New Urban Agenda to decentralize powers to strengthen local bodies. But in Punjab or other provinces, provincial government are establishing more provincial or divisional level authorities. Architect Silwat Afzal (NCA Lahore) highlighted the reason of migration in the cities that people migrate from one place to another for two main reasons; for education or health and other is for better employment. Dr. Fariha Tariq (Chairperson, Department of City & Regional Planning, UMT) talked about house design and said that our public don’t want to live in a house of 2 or 3 marla because these are not designed as per socioeconomic and cultural grounds. She also told that half of cities infrastructure include housing; addressing housing issues will pave towards achieving set targets of New Urban Agenda. Mr. Shoaib pointed out that it is the negligence of our municipal institutions to guide growth and development of urban areas in a planned fashion as compared to the developed countries where one can see the uniform pattern as those municipalities make local plans and regulate it in efficient way. While in case of Pakistan there is a haphazard pattern because our local authorities do not go for detailed planning. Mr. Mutahir Awan (Assistant Professor at UMT Lahore) said that we should celebrate that our urbanization rate is increasing resultantly having less open spaces, and he gave a solution that there are other ways already tested in the world to increase the green spaces through roof farming etc. Mr. Shoaib said that we the professionals should take positive initiatives and make proposals for govt. and agencies either they accept it or not. We should try again and again for this cause and should be realistic.

In the end all the participants agreed to further deliberate on the targets and practicalities of the New Urban Agenda. The information gathered will be shared in subsequent meetings and the recommendations will be shared in the forthcoming issue of the IPP Newsletter.

Meeting was ended with words of thanks by Mr. Khurram Farid Bargatt Secretary General of Institute of Planners Pakistan with a great hope that our cities would be able to implement The New Urban Agenda in true spirit.